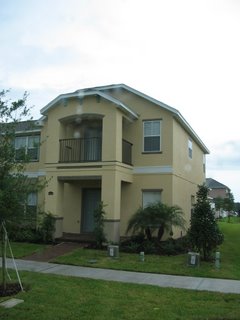 After a series of, shall we say, interesting events, we did close and get into our house on Friday, July 14 as scheduled. Happy birthday to me!

Tim’s drive down was uneventful, if long and boring. The kids and I stayed in Fenton with my parents from Sunday to Thursday the 13th. Ellie and Micah both had to be taken to the doctor, Ellie on Sunday (her ears and possibly her lungs were infected) and Micah on Monday (ears clear, but given antibiotics anyway since she wasn’t shaking the cold she’d had for several weeks–the doctor wanted to make sure there wasn’t something else going on that she couldn’t detect). They were both fine by Wednesday.

So Thursday we made the trek to Detroit Metro Airport. We got parked, luggage checked, gate passes for my parents, and through security in no time–no lines anywhere and even found a parking spot on level 6 near the bridge to the terminal. The timing worked out perfectly–we had time for lunch and got to the gate about 15 or 20 minutes before boarding started–enough time to take all the girls to the bathroom and hopefully avoid in-flight potty trips. I even was able to get “pre-boarded”–they don’t normally let kids board early on flights to Orlando, since that would generally be 90% of the flight. But I talked to the gate agent and she was nice enough to let us slip on with the elite passengers. The girls were really good on the flight (hooray for DVD players), except for a few minutes toward the end when Micah and Ellie had about reached their limits. But even so, things could not have gone any better.

Our only glitch was that Tim wasn’t waiting for us at the gate. They wouldn’t issue him a pass until we were on the ground and off the plane and could have the gate agent call the ticket counter. I guess that keeps the crazies from slipping through. But he made it to us in about 10 or 15 minutes, enough time for me to grab some Froot Loops from a snack bar to keep the kids occupied.

Oh, and there was one other huge glitch. When I called Tim from the plane to let him know we were there, he informed me that he’d gotten a call about an hour earlier saying that we would not be able to close the next day. Great. It seems that the insurance company and the builder were in litigation and although a settlement was in the works, it wasn’t finalized and so the insurance company wouldn’t issue a certificate. We were staying at a short-term rental apartment Thursday night but they were full for Friday. The builder had agreed to pay our expenses for a few days, though, so we knew we could figure something out. We were told that although they didn’t know for sure, we’d probably be able to close by the middle of the next week. The only thing for certain, they said, was that we absolutely would not close on Friday.

Friday morning we went to the home of a friend of one of Tim’s co-workers. They were originally going to watch the girls while we went to the closing on Friday morning. Instead, they invited us all over to figure out what we were going to do. They were very kind and let us use their phone to call and cancel all the utilities we’d scheduled to start that day or the next. It took several hours, but by lunch time we’d gotten everything postponed to the end of the next week or beginning of the following one. Then the phone rang. It was the builder saying, “Guess what? You can close today! How soon can you get here?” Yikes. We jumped in the car, ran to the bank for our check for closing, and raced to downtown Orlando where we closed at about 2:30. We made frantic calls from the car on the way to get utilities re-rescheduled.

Closing was smooth and fast–about 30 minutes. In no time, we were at our new place so I could see the finished inside for the first time! Some guys from the office came over after work to help us unload the truck. They finished at about 9:00.

We love our new home. Of course, there have been some little “bugs,” as you’d expect with a new house. Especially since ours is the only building of townhomes finished, and we are the first to move in. Plus, ours is the first in the building, where the utilities enter for everyone else. We had some problems with the water which turned out to be a lot of sediment in the lines blocking up the fixtures. Here’s what came out when we hooked up a hose to our washing machine supply: 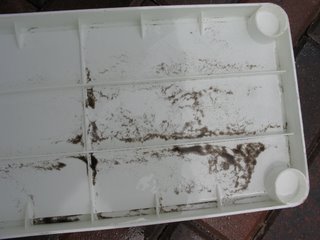 Beautiful, no? We got the plumber out, and he flushed the lines thoroughly which has taken care of the problem. He also fixed our dishwasher, which hadn’t worked–turns out the supply line was kinked. It works beautifully now.

We’ve had the most problem with the mail and the phones. Yet again, the postal service did not enter our forwarding order (despite assurances from our carrier that he had done it) so we have not gotten any mail. Although it didn’t matter for the first few days we were here, since the builders hadn’t yet put in mailboxes for us! We got boxes by Wednesday, I think, though we still haven’t received any forwarded mail. Someone in Novi was supposed to fix things for us on Friday, though, so we’ll see if we get anything today.

The phone still isn’t hooked up completely. Right now we have a line going out the window to the box on the outside of our building. We can receive but not make calls on this line. It seems that the builders failed to connect the inside wiring to the outside wiring. Great. Someone’s supposed to start trying to figure that out today, I think. Of course, if Bell South had come Thursday to install the line as they said they would, or even on Friday like they promised after that, a fix might be in the works already. But since they didn’t come until Saturday, we can’t even start the ball rolling till this morning. In the meantime we’re still using our cells to make calls. But you can call us on our new number if you have it.

I’m learning my way around pretty well, and figuring out the best places for shopping, etc. We live in the boonies, so there’s no running out for a quick trip to Target to pick something up. There are three Targets that I know of, each about 20-25 minutes away. For two of them I have to take toll roads; for the other I have to go through the often-horrendous traffic around the airport. On my one trip there, I ran into one of the most amazing downpours I’ve ever experienced. I had to pull into a parking lot since I couldn’t see at all. I’ve been through drive-through car washes that dumped less water on the car. The storms here are incredible. They pop up nearly every afternoon and can be really intense, although short-lived. The cloud formations are unlike anything I’ve seen before. I’ll post some pictures later. It makes for really beautiful sunsets, too.

If you’ve read this far, I’m impressed. But I’ll stop for now and tell more stories later, and put some more pictures up too. Please keep in touch with us, and we’ll keep you posted on our new adventure!