Thunderstorms, gators and bugs–oh my! 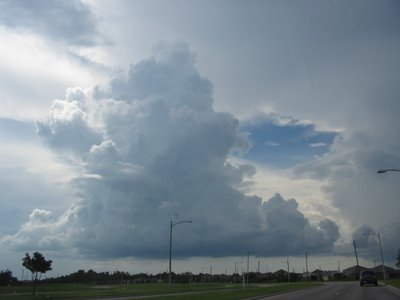 Or, “Toto, I don’t think we’re in Kansas anymore…”

Things sure are different here in Florida. First, the weather. The cloud formations are like nothing we see in Michigan.

This huge cloud is nothing unusual. There are often several layers of clouds, all different and going in different directions. And isolated doesn’t begin to describe the thunderstorms. There can be an absolutely torrential downpour, high winds, lots and lots of lightning (one a few days ago, a county or two over, had 300 cloud-to-ground strikes in 10 minutes) in one area, and absolutely nothing just a mile away. But if you’re not in a storm, you can see them all around you. On one of my first trips out, I drove into this unreal thunderstorm (which I briefly mentioned in my last post). I could see it from a long way off and could tell I was going right into it. From a distance, it looked like a huge tarp, full of water, stretched across the sky–just a huge, solid bank of clouds. But it was as if there was a hole in the middle of the tarp, where the water was pouring through. I could actually see sunlight coming through the “hole” where it was raining, making the rain glow like a lit-up fountain. I wish I’d had our camera. Then I drove into it. Then I stopped, since visibility was worse than zero.

Tim had his first run-in with a gator this morning, literally. He was running early this morning in a development nearby, on a path that runs alongside a lake. He heard a commotion in the water a bit ahead of him and assumed it was a bird landing. But no, it was a gator that had just gone off the path and back into the water. He wasn’t sure what to do: pass by slowly, like you would a dog, then take off running? Just run past as fast as he could? Either way, it was a small gator so he knew he at least wouldn’t be swallowed up. He decided to do the slow walk by, then ran as fast as he could, and that seemed to work. But I’ve asked him to please leave a note when he runs in the morning, telling me when he left, when he expects to be back, and where he’s going. That way I’ll at least know where to go gator hunting!

Speaking of hunting, there was this bug in our back courtyard just a little while ago… 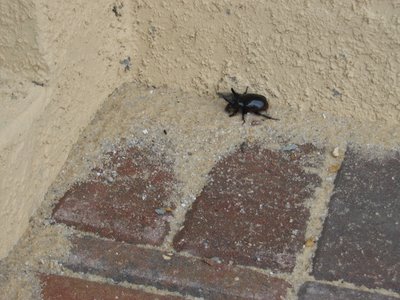 Those are standard-sized bricks he’s on, and it’s right at our back door. I’m guessing he’s about two inches long. I think he was trying to burrow down into the sand, but couldn’t since it’s just a bit that’s washed out from between the bricks and blew up next to the house. Tim just came in and said it’s a rhinocerous beetle. Whatever–I think it’s just big and ugly.

I think I’m going to call the exterminator to get a quote today. Wonder if they can help with alligators?