I’m beginning to think we should change the title of this blog to “critter stories” or something like that. But they are one of the biggest differences we’re experiencing here on a daily basis! Here’s yet another example of something that just wouldn’t happen to you in Michigan. See this frog? 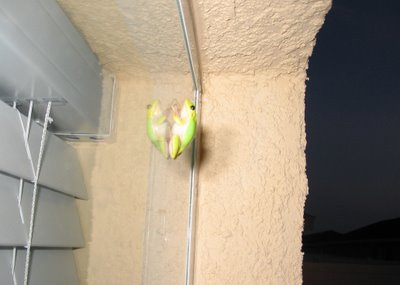 Cute little thing. This one was clinging to our back door early one morning a few weeks ago. We don’t get them all the time, but we see them out there occasionally. Well, last Thursday morning, Tim and I both had to go to an early meeting. Of course we were rushing around a bit, trying to hurry the kids out the door so we wouldn’t be late. Tim opened the back door to go out and was quite startled when he felt something cold and wet hit his head. As Tim jumped with surprise, we saw one of these little frogs bounce off his head and into the house, then hop quickly across the floor and under the refrigerator! Apparently the frog had been hanging out on the doorframe and fell on Tim’s head when he opened the door. But now we have a frog under our fridge. Okay…. so what are we supposed to do with that one? It took us a few minutes, but we were able to catch it and put it outside without harming it. We were a little late for our meeting, but had a pretty good excuse!