I made a princess cake for Bethany’s birthday. It wasn’t too difficult, but someone asked me to document the process. So here goes!

I baked the cake in a Pampered Chef 8-cup batter bowl (which I borrowed from a friend). I also borrowed a cake doll torso thing (don’t know exactly what they’re called, it’s like a Barbie from the waist up but a spike from the waist down). Unfortunately there was some kind of mishap with Barbie the Spike and her arms were no longer attached to her body. They couldn’t be reattached, so on to Plan B!

I raided the girls’ boxful of Barbies and pulled out a Cinderella. Perfect! Almost. Unfortunately, her legs were too long–her hips would have stuck out of the cake–so they had to come off.  I was able to snap them off carefully and put them back on when we were done. I wrapped her lower body tightly with several layers of plastic wrap so we wouldn’t end up with cake and frosting inside her.  The only plastic wrap I have on hand right now happens to be red. It ended up looking pretty gruesome, a dismembered doll looking like she’s wrapped in red bandages. The girls thought it was pretty hilarious!

Anyway. I baked the cake the night before I needed it. I used two devil’s food cake mixes. When I filled the batter bowl there was a bit of cake batter left over, so I put it into an 8″ round cake pan. Good thing, too–I ended up using it. I set the temp and timer according to the package and took the round cake out then (35 mins or so). The bowl cake ended up taking about 50 minutes, I think. I just kept testing it with a long bamboo skewer. It did fall in the middle and ended up with quite a bubble there, but it didn’t matter–that was on the bottom and hidden when all was said and done. I froze the baked cakes overnight. It’s much easier to frost and decorate a frozen cake–far fewer crumbs.

Party day. I made a real buttercream frosting. I wouldn’t do that again for decorating. Very, very tasty but it melts at room temperature. I kept having to stick the bowl of frosting and the cake into the fridge, and my hands into a bowl of ice water. Next time I’ll either just buy prepared frosting or make a shortening-based frosting (ew).

Assembly was pretty easy. I realized that the doll looked too big for the “skirt” when it was just the cake baked in the bowl, so I sliced off the domed top of each cake to level them and put the 8″ round underneath, like so: 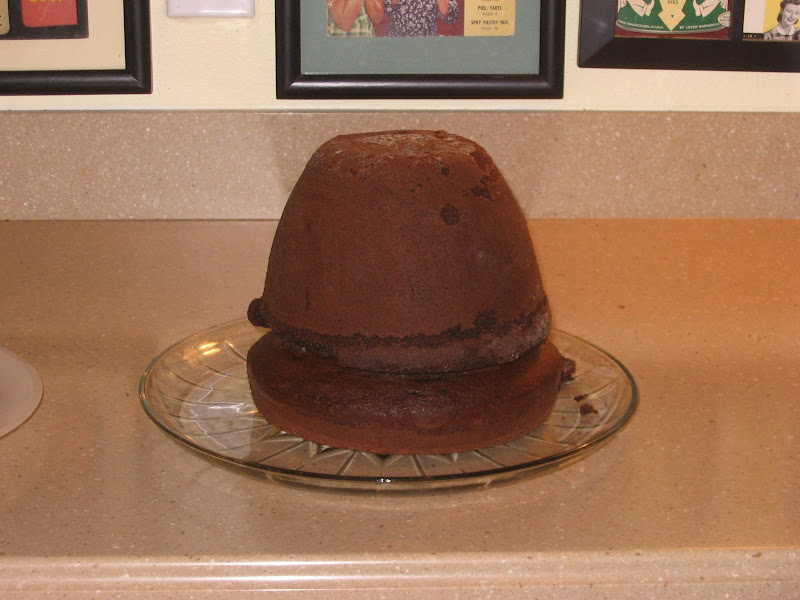 Except of course I put frosting between the layers. The decorating was pretty straightforward after that. First, a crumb coat: 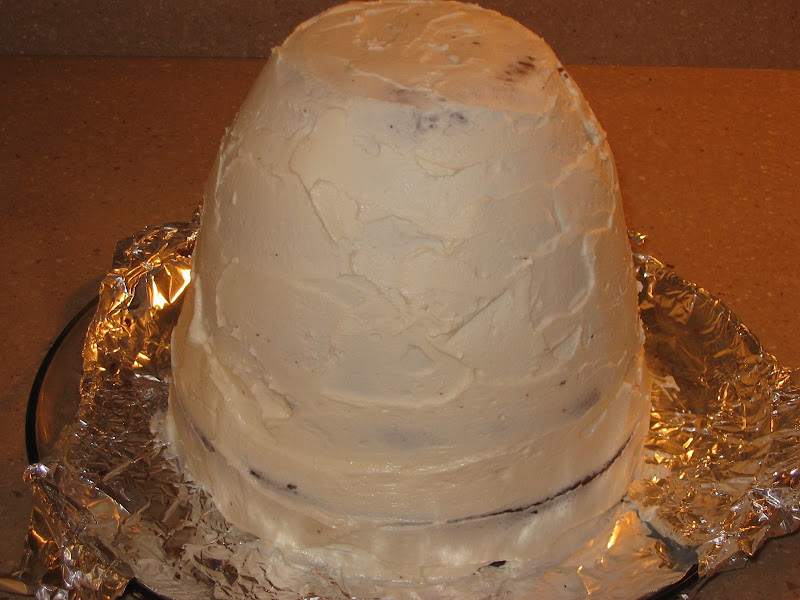 Then, a top coat. I gently dragged a bread knife vertically through the frosting to make the ridges. 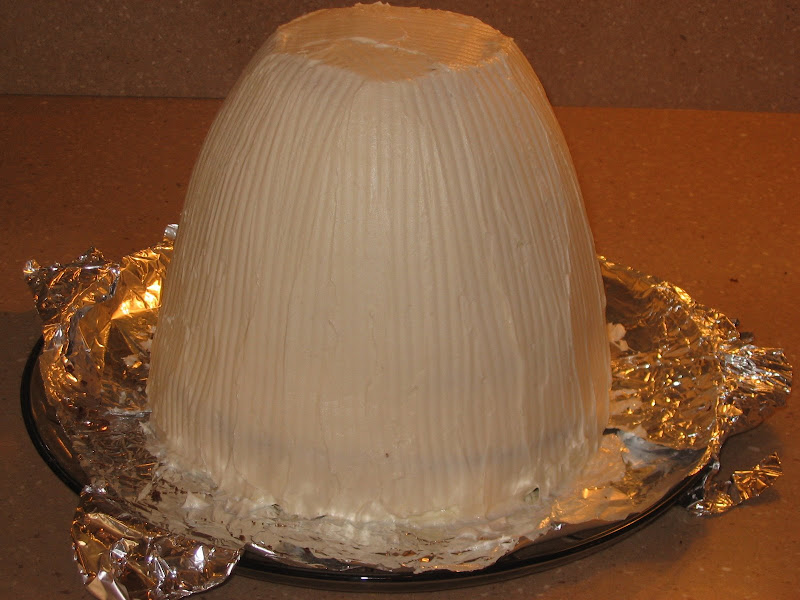 I’d bought some Disney Princess glitter cake decorating gel, which I used for the sashes and stripes on the skirt. 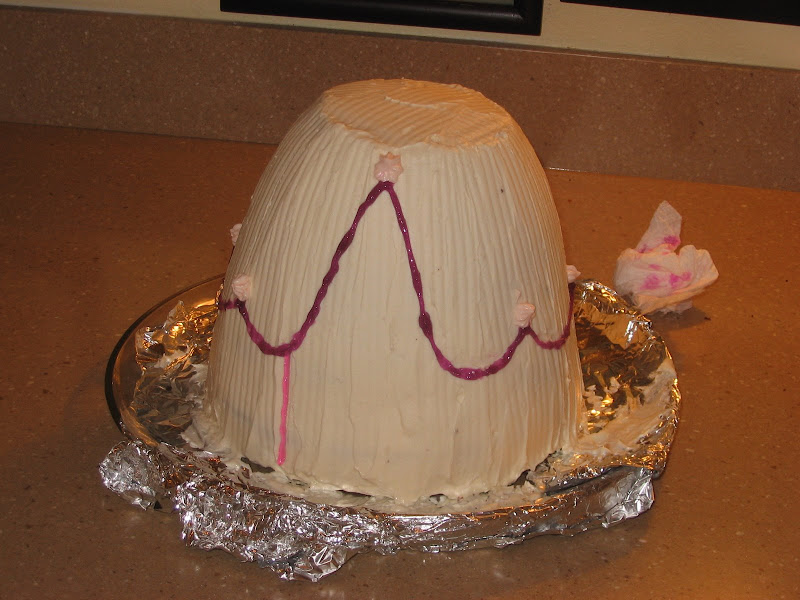 I did the purple first, then the rosettes (I tinted the rest of the frosting after I’d finished the ridged coat), then the stripes.  I cut a hole in the top for the Barbie (I intentionally cut the hole small so she’d fit tightly) after I’d pretty much finished the skirt. I started piping rosettes onto the torso for the bodice, but everything was getting really melty by then despite keeping the frosting in the fridge and repeatedly sticking the whole cake in there for a while. I had a scary moment when I thought the cake wasn’t going to fit in the fridge, but luckily Barbie’s head was jointed and I was able to tip it to get her to fit. 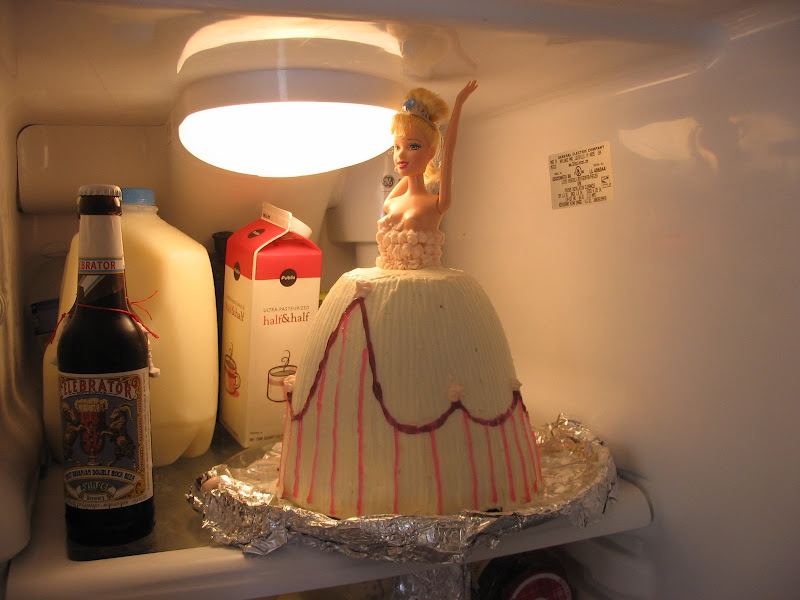 (I think I may have to bust into that Celebrator later tonight, even if it was Tim’s Father’s day gift.) Eventually I was able to finish piping the rosettes on the doll, then decided to do the top of the cake too. I also added straps to the dress with the decorator gel, since the girls complained that she looked weird without them. 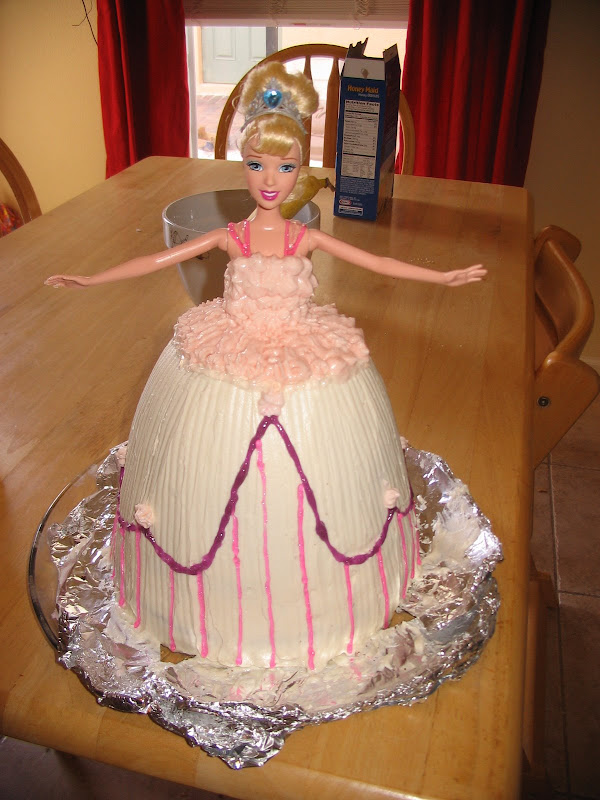 I should have stopped there, but I added a bit more purple gel to the top of the skirt to try to tie the parts together. I liked it better before I did that, but couldn’t scrape it off without destroying the rosettes and I was almost out of frosting. 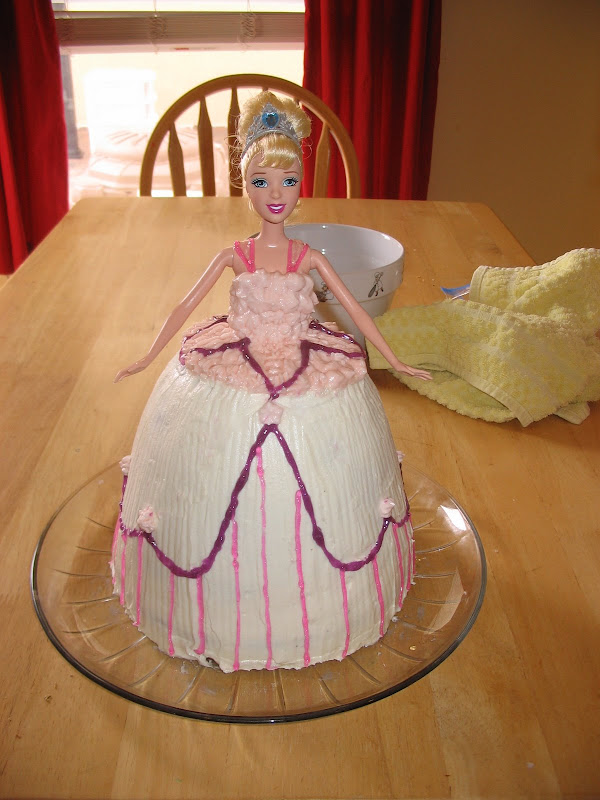 I used the last bit of buttercream to pipe rosettes directly onto the plate, and stuck candles into them.

So there it is. Things I’d do differently: get a doll that’s intended for cakes; don’t use a butter-based frosting; stop sooner.

Maybe I’ll do another post on how I made the castle for Ellie’s birthday.