On 12 October 2010 by Lisa With 0 Comments - life in Florida, Random ramblings

First and foremost, I have our newsletters page working again. If you’d like to see our most recent newsletter or any of our newsletters from the past, go to the “Pages” menu at the top of the page and select “Newsletters.” Oh, and make sure to check out Tim’s latest video project in the left sidebar.

It’s been over a month since my last post. I told myself when I put all the effort into updating the blog that I would post more regularly. Well, life gets in the way sometimes.

On September 12, my grandma (Eleanor “Peg” Highfield) passed away. I was able to catch a flight north and attend the visitation and funeral, as well as spend a few days with my parents and sister. Grandma was 94 years old and was ready to be with Jesus.

This tintype of my grandma and my grandpa (Keith Kinney) was taken sometime before 1938, when they were married. The picture was taken in the photography studio at Greenfield Village. Grandma told us that the equipment in that studio originally belonged to her grandfather, Frank Muir, who had a photography studio in Detroit. When he died, his assistant, Mr. Tremiere, bought his equipment and set up shop in Greenfield Village.  My grandma tells the story that originally her grandma agreed to sell the equipment for a certain price. After the sale was complete, she learned that the equipment was actually worth quite a lot more than she was paid for it. However, she also discovered that one vital piece had been overlooked by Mr. Tremiere. When he came back for that piece, she refused to hand it over until he agreed to her price. Quite a shrewd woman!

When I posted this picture and story on Facebook, I learned that my three-doors-down neighbor’s father had worked in that same studio in Greenfield Village with Mr. Tremiere. What a small world!

After getting home from Michigan, we had a couple of more-or-less normal weeks and then took a long-planned vacation to visit my sister and her family in St. Louis. The girls had a great time playing with their cousins, and we all enjoyed taking in the sights. But it’s good to be back home now. Tim won’t be here for long, though–he’s taking a trip to the Detroit area at the end of this month.

Okay, I think that about covers it! 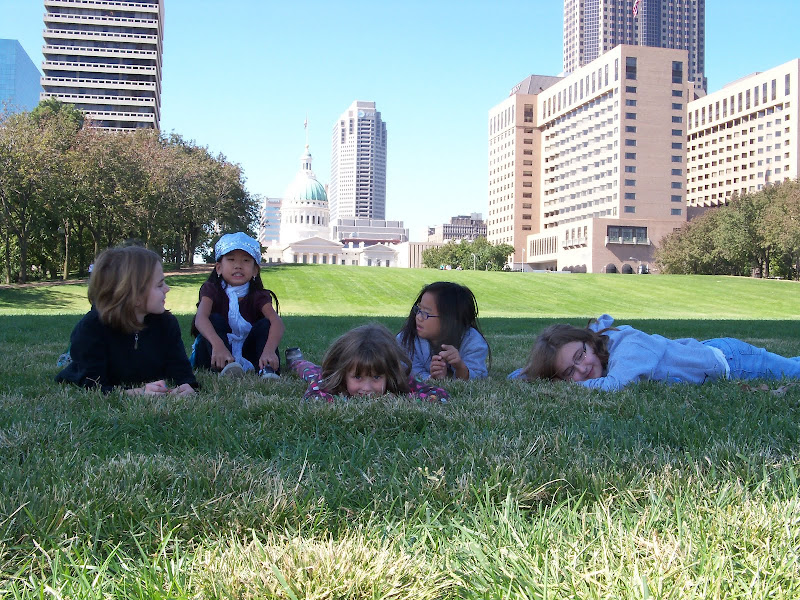 Cousins, in the shadow of the Arch