We celebrated Bethany’s 10th birthday a few days ago. She wanted a “Tangled” theme for her party. I went a little crazy on the cake. 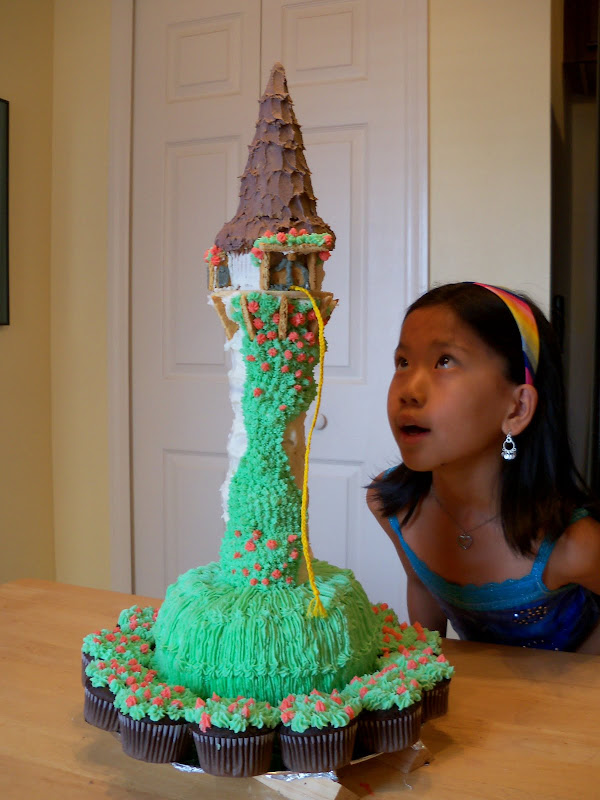 They say you should never see how sausage is made. If you feel that way about architectural cakes, stop reading now. If you want to know how I did it, read on. (Please forgive the slightly fuzzy pictures–the battery in my camera was low and I didn’t realize it.)

First, credit where it’s due. The beginning of the idea came from here: http://bit.ly/ilJhm3.  I liked the basic idea, but I didn’t want to have a styrofoam base; I wanted cake. After I pondered how to make that work, a friend put together a dowel in a piece of plywood with another thin round piece of wood with a hole in it that could be threaded onto the dowel (thanks, Bob!). I then drilled a hole in the center of a large plastic platter I had so it could also go over the dowel, and added some extra supports for the plate. I used a little hot glue to hold the plate, plywood and supports together. 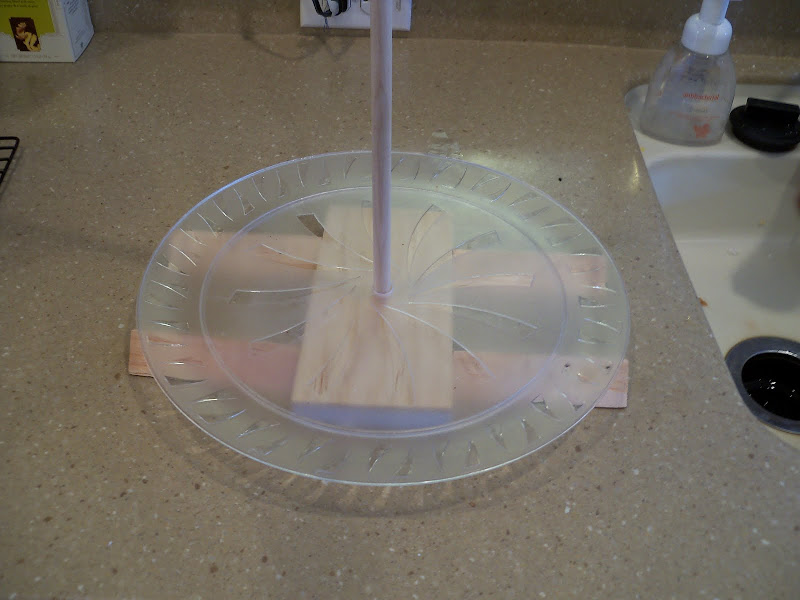 I made up two cake mixes. I baked one round layer, one small bundt-shaped pan, and 18 cupcakes. I bought a package of eight pecan pinwheel rolls and one huge cinnamon streusel-topped muffin, plus a pack of large waffle ice cream cones. (I got the muffin after I took these pics–it was from the Target bakery). 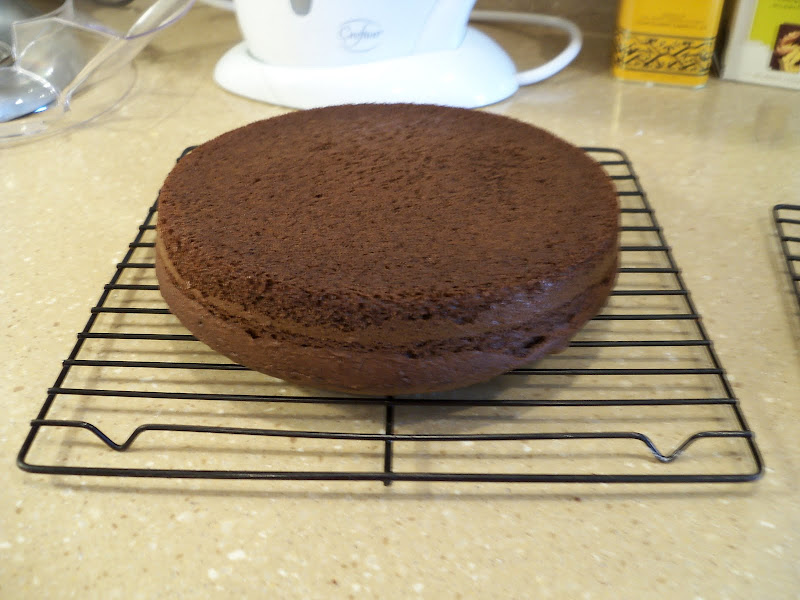 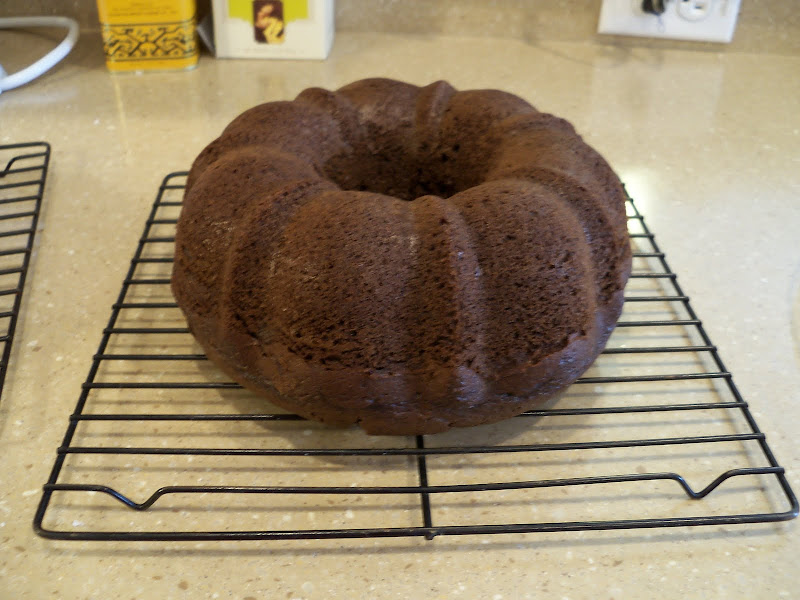 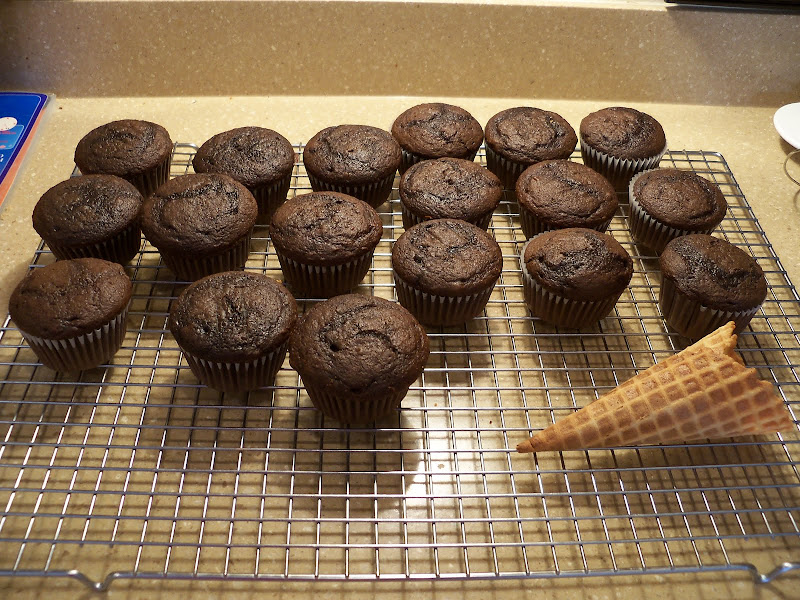 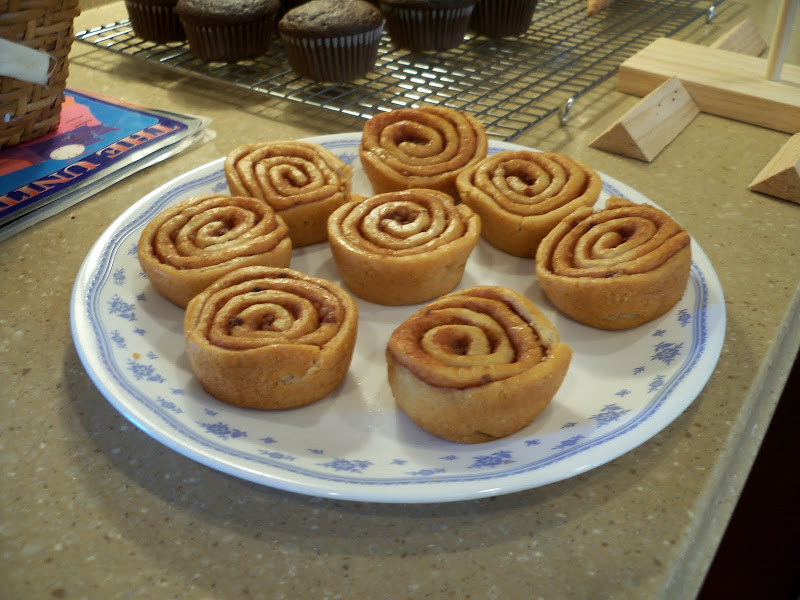 I started by cutting the layer in half and putting it around the dowel. I put a little icing (http://www.wilton.com/recipe/Buttercream-Icing) over the layer then threaded the bundt cake over the dowel onto the layer. 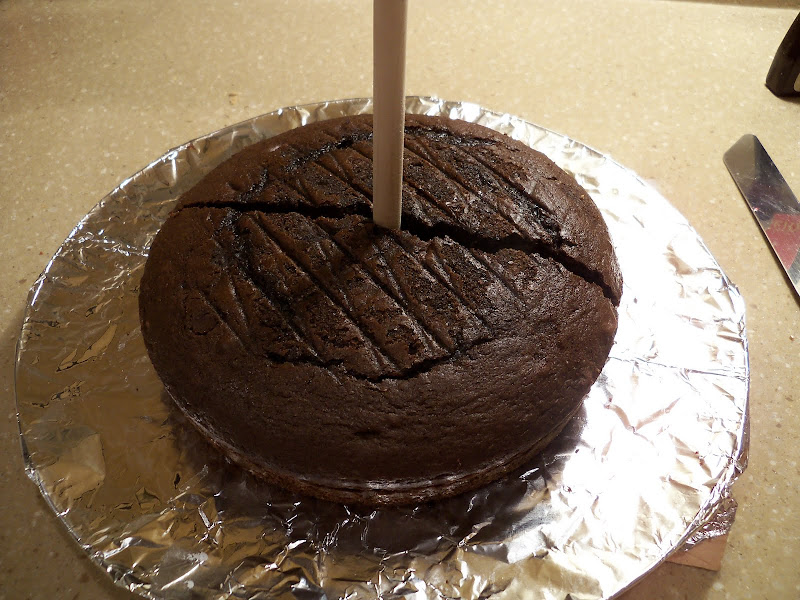 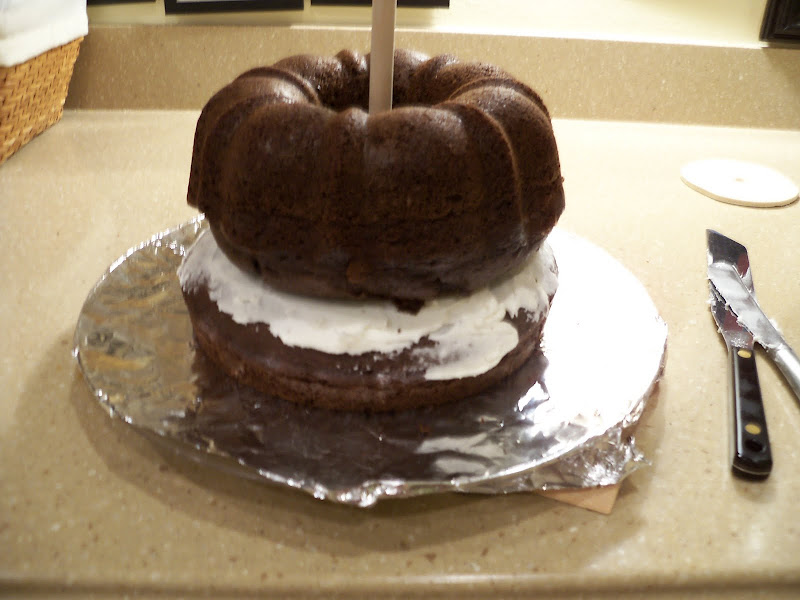 This is where I made a big mistake. I took the paper off a cupcake and threaded it onto the dowel, upside down, so it rested on top of the bundt cake. As I built the tower, it slowly sank. I should have either (a) used a bowl cake, (b) stuffed the center of the bundt cake with more than one cupcake, or (c) used a non-edible support of some kind there. Lesson learned: gravity always wins.

Once that cupcake was in place, I started building with the pecan spinners. I used a Pampered Chef “corn cob knob” to pre-drill holes in each one, then threaded them onto the dowel. I used a bit of icing as mortar, and reversed the direction of each one as I built. 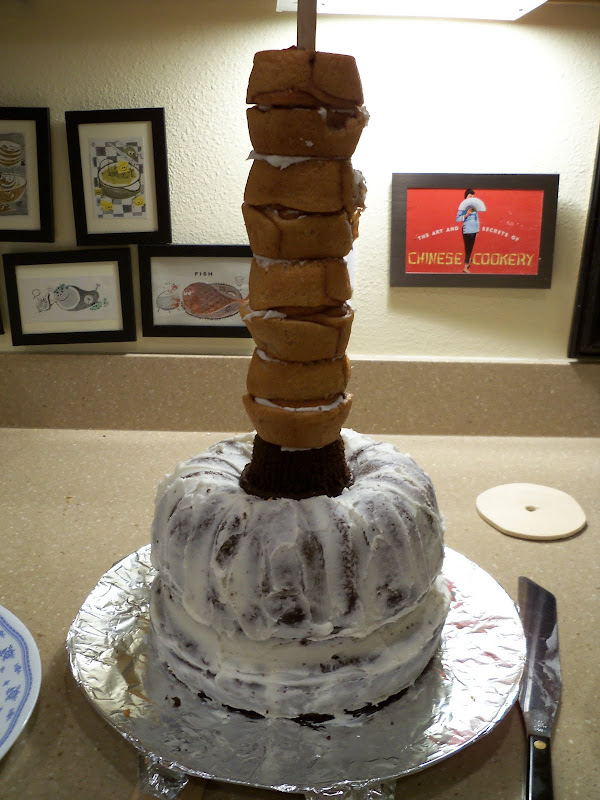 I topped it off with another cupcake, then the jumbo muffin (with its paper still on). I tested it by putting the ice cream cone on top–the height was perfect! 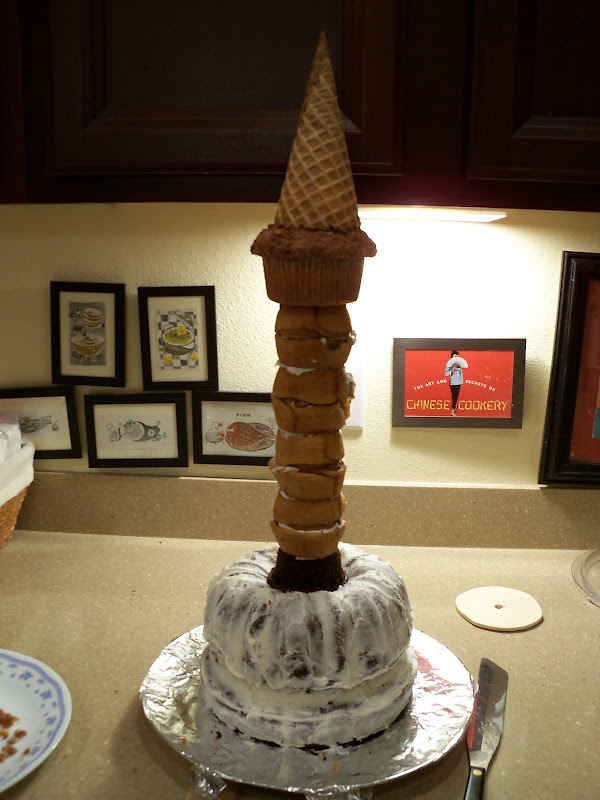 Except I had just made my second big mistake. That muffin was HEAVY. Within a few minutes the whole tower had sunk close to an inch. I put another cupcake under the muffin, but it kept sinking. The tower just couldn’t bear the weight of the muffin. So I took the muffin off and threaded the little round platform on. By this time, the dowel was so sticky that the platform barely went onto it–there was no chance it was going to sink. Unfortunately, the tower continued to sink under it so I ended up with a gap between the top cupcake and the muffin platform.

At that point, it was just frosting. I did the assembly and a crumb coat the night before the party, then decorated the day of. I had to thin the icing for the tower–it was pulling the pinwheels apart. I only had 4 tips–three rosette sizes and a piping tip–so everything was done with those. I just colored my buttercream with food coloring and worked my way from the bottom up. To do the “roof,” I first globbed purple frosting onto the muffin then put the ice cream cone into it and frosted them both. I made the “shingles” with a table knife. 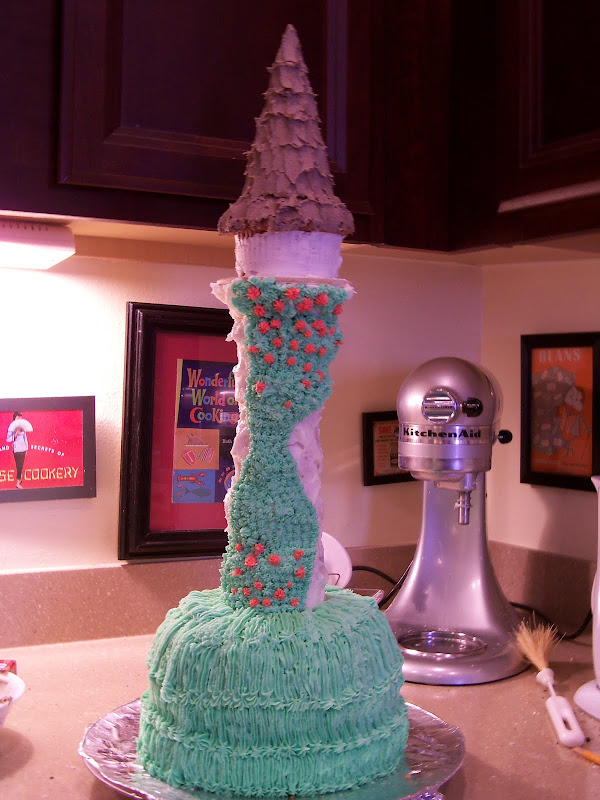 To do the architectural trim, I set out a few graham crackers the day before so they’d get stale and a little soft. They were much easier to cut that way. Using a small serrated knife I cut the shapes for the supports, doorway and window and placed them with icing. 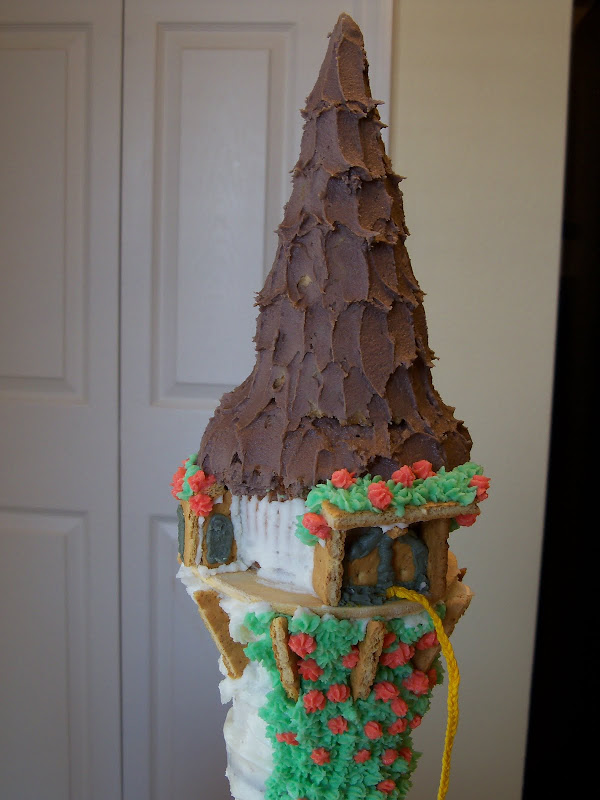 I probably could have done this with just one cake mix, but I wasn’t sure exactly how it was all going to come together or what I was going to need. So I frosted the extra cupcakes and put them around the cake. 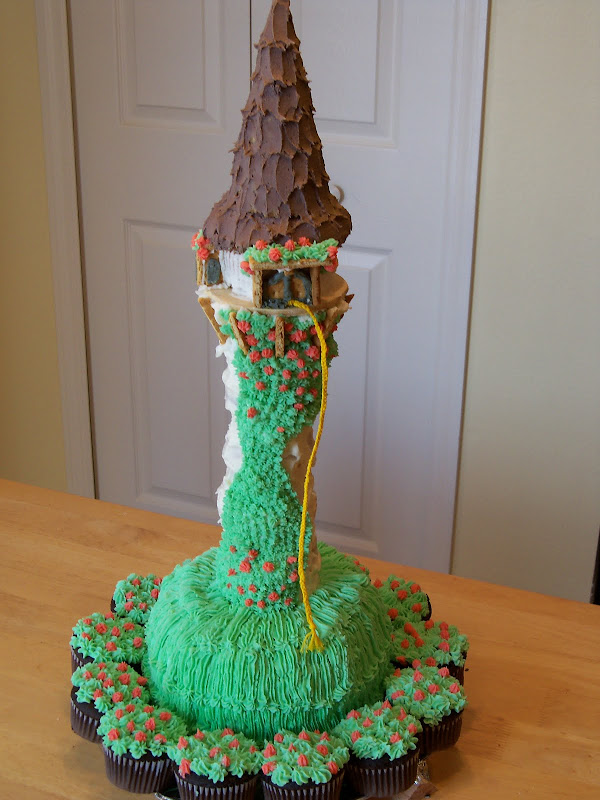 By party time, gravity was beginning to take its toll, but I didn’t really care. 🙂 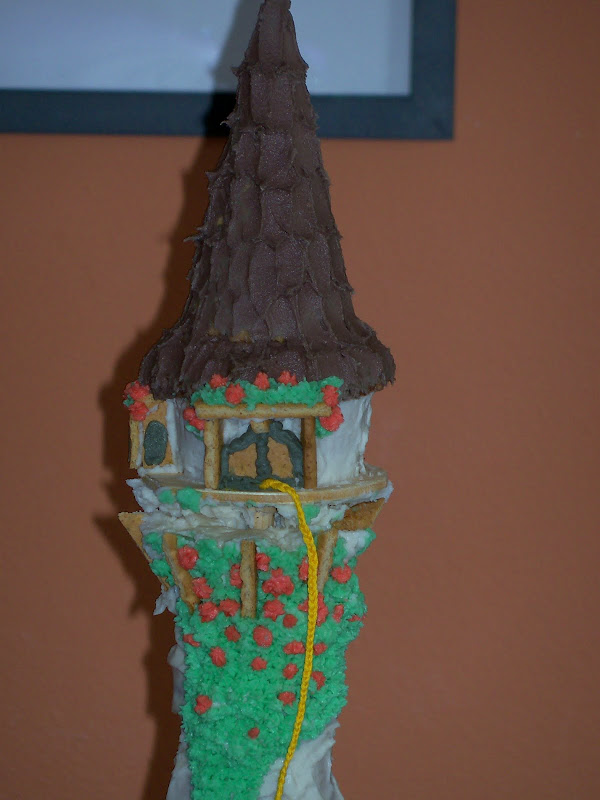