Back to blog, back to school

On 17 September 2011 by Lisa With 0 Comments - Homeschooling

I can’t believe it’s been so long since my last post. Well, actually I can. It was kind of a crazy summer. We spent 10 weeks away from home. Most of that was in Michigan, but for a week and a half we were in Colorado. All summer I thought about writing a post, but I could never quite get my thoughts focused enough. Suffice it to say, the last few months have been really good and really busy.

We continued schooling through the summer, albeit at a more relaxed pace. We’d taken quite a bit of time off over the winter and spring so felt like we really needed to keep going. We finished up last year’s language arts and math programs about mid-July, but kept plugging away at our Core until after we got home in late August. We took a couple of weeks off as we chose and ordered our next curriculum and finally got everything started back up over the last two weeks. Tim has now done two weeks of math with the girls using the same program as last year (Christian Light Publications, grades 3 and 5) and it’s been going really well. We decided to go back to Sonlight for science and language arts, and continue with Sonlight’s Core. Our first week went amazingly well. If our whole school year can continue anything like this, it’s going to be fantastic! 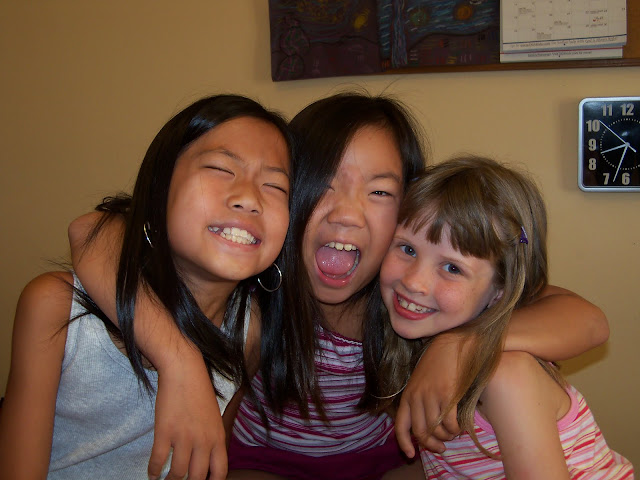 I was really unsure about using Sonlight’s LA. Since we’ve been homeschooling I’ve gone from Sonlight to Well-Trained Mind to Christian Light, and now back to SL. We quit using SL LA in the first place because it was too much writing for my kids when they weren’t ready for it, and I felt it was lacking in grammar. WTM doesn’t require any composition for the first couple of years, focusing instead on grammar, copywork, dictation, and narration. That was great for a year, but when we started our second year with it we all realized that we were getting tired of listening to my voice (since it’s all scripted and presented orally). So partway through last year I switched to CLP. That was also great for a while, as we all loved how independently the girls could work. But while the spiral method is working great for math, it got pretty boring for LA. And the materials were showing their age (last edited in 1997)–did my girls really need to learn how to write their name and the date on a library book card to check it out? Or how to use a phone book? I think not. I had supplemented CLP with a Zaner-Bloser writing curriculum that had worked pretty well, so I knew the girls had gotten to the point where they could handle writing. Thus the switch back to Sonlight.

The complicating factor is that at the Core we’re on now (Core D, formerly Core 3) the LA and readers coordinate with the Core. So the question was, could I use the same LA program and level with all three girls? Sonlight’s website and catalog say that their D materials are suitable for most kids between 8 and 11 years old or so. After looking at the sample schedules I decided to give it a go, adapting things as I go along to make it a little harder for Bethany and a little easier for Ellie and Micah. So far it’s worked perfectly. The first week’s assignments have been easy to adapt–for example, on a writing assignment having Bethany do 8-10 sentences and Ellie and Micah do 4-6. Bethany’s already done the Sequential Spelling level that SL recommends with this core, so I put CLP’s 5th grade spelling lists into SpellingCity (I already had the CLP grade 5 teacher’s book with the lists) and had her work on that while I did spelling with Ellie and Micah.

I’ve had to schedule our mornings kind of carefully, not so much in how long to spend on each thing but in who is doing what. Ellie and Micah are doing the Regular readers that go with Core D, while Bethany’s doing the Advanced readers. That means that every day Ellie and Micah will need to read the same pages of the same book. Sometimes all three of them will be reading the same book (the Advanced readers including all the Regular ones plus extras). They’re also all doing Rosetta Stone Spanish on the computer. So I’ve figured out a schedule where, for example, Bethany is doing Rosetta Stone while Micah is reading and I’m working with Ellie on handwriting. When everyone’s finished, they switch. This week it worked beautifully. The house is so quiet while they’re each focused on their own work! I’ve even been able to do things like pop in a load of laundry while they work. It’s been amazing.

Tim loved the science he used with the girls last year (Real Science 4 Kids), but he’d reached a point where things had gotten too complicated for Ellie and Micah. Sonlight’s Science D uses RS4K but not exclusively. So far that’s also worked well. Core D has also started very positively. This is the first Core where the girls have had any written work to do, and they’ve been handling it well. We do some of it together, and they do some independently.

The one thing we haven’t figured out yet is bible. For right now, Tim’s reading Hero Tales Vol. IV to the girls a few times a week.

We’re still actively involved in our homeschool co-op, HIGH Day. We’re three weeks into our 11-week fall semester and loving it. The girls get to do fun classes like art (“Meet the Masters“), P.E., Odyssey of the Mind (creative problem solving), and hands-on science.

So that’s life on the homefront for right now. I’ll try to get Tim to write a post about what he’s been working on in the studio sometime soon.