On our way to the new city

How is it that time can pass so quickly, and yet seem to take forever?

It hasn’t even been a year since we first started exploring the possibility of a ’round-the-world move. It was in late July of last year when a friend/co-worker casually asked Tim (in my presence) if he’d ever considered working in Chiang Mai. Tim’s answer was that he’d love to, but “Lisa would never do that.” My (slightly offended) response: “You never ASKED me!”

So he asked me. I said I’d be willing to consider it, at least. And that was the beginning. He next contacted the supervisor of the Chiang Mai office, who said that they were really wanting to get a more stable presence there: preferably a married couple, ideally a family. And that the people who were there at that time would be returning to the U.S. at the end of the year (2011). Well then. The office pushed things into fast forward and in late October/early November gave us preliminary approval to go. The timing was the next biggest question. They really wanted us there ASAP, but we told them we had commitments that would keep us here until late April. That put us on target to arrive in Chiang Mai in early summer 2012.

At that point, moving became a reality, albeit a distant one. We started slowly clearing things out, getting rid of stuff, thinking about how we were going to do this. But it was too early to really start doing much. After the first of the year we started preparing in earnest: online garage sale, trips to Goodwill, talking to family about what we should do with antiques and family “treasures.” A trip to St. Louis and Detroit in February took the first load of stuff destined for storage in family basements. More clearing out, a real garage sale, more online sales, more donations, and a lot of good-byes found us with two fully loaded minivans headed northwest on May 10.

There had been quite a few little bumps in the figurative road before we hit the literal one. Starting in the winter, it seemed like things just kept breaking. The first thing to break was actually a bit before that, I think in the fall: the inside passenge door handle in our minivan. No big deal, we had that fixed. Then a light fixture in our kitchen failed. About a month before our move date, the breakages started coming faster. The rear liftgate latch on the minivan snapped. Ordered the part for the minivan, called an electrician for the kitchen. Next it was the washing machine, which refused to agitate on one cycle. Back online to order a part for that. Electrician fixed the kitchen light easily (and inexpensively), new minivan latch arrived and Tim installed it. He then went out of town for two weeks and arrived home 10 days before our move date.

The washing machine part arrived while he was away, so as soon as Tim got home he installed that. But it didn’t work right. So he called and ordered yet another. In the meantime (now less than a week before moving), the lock on our front door broke. And our hand-vacuum that we used on the stairs. And the full-sized vacuum that we used for the rest of the house.

Our neighbor (and the husband of our property manager) was able to fix our lock. The full-sized vacuum really only needed a belt. The hand vac had failed catastrophically and wasn’t fixable.

The second replacement part for the washer arrived two days before we were leaving. That morning, Bethany dropped a heavy object on her toe. X-rays showed a slight crack in the tip of the toe bone. Yes, another breakage. (Thankfully, within a couple of days she didn’t have any more pain, though.) Tim installed the new washer part; it didn’t work right either. No more time for repairs, we had to get a new washer pronto. We found a used one not too far away. On the way to go get it, I joked to Tim: “What else could possibly break?” When we arrived, the driver’s side door latch snapped off in his hand. SERIOUSLY?!?!

The next day we invited friends to come and take anything that was left. We packed the leftovers in a box and Tim took it to Goodwill. Walking across the parking lot, the bottom burst out of the box and everything in it crashed to the pavement, including a whole lot of glasses. More breakage.

The next day we drove away from our home for the past six years and headed for my sister’s house in St. Louis. The first day of driving went slowly, with a much later start than planned and every stop taking 2-3 times as long as we expected. The second day began much better with a good, early start… only to be thwarted by a flat tire! All we could do was laugh.

We made it to my sister’s with no other problems or breakages and had a nice weekend with them. Monday morning as we started getting ready to head to Michigan, Tim went out to the garage and blew a light bulb. On the drive, his left-turn indicator (on the rental car) stopped working. But then it spontaneously started working again. At last, something working in our favor!

As of this morning the car door handle is fixed. We really hope that will be the last repair we’ll have to deal with! We will be here in Michigan for about three and a half weeks before flying out of Toronto on June 9. 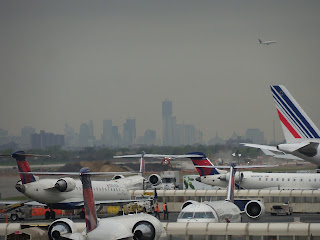 For a few years now I’ve thought that any day that I can see the Manhattan skyline is a good day. Today was a good day.

I have had a love/hate relationship with New York City for several years. As a kid in the 70s I was just scared of the place. It was dirty and violent from what I could tell on TV. As an adult I didn’t enjoy doing business there mostly because I encountered so much of the stereotypical New York abrasiveness. It made for some really unpleasant dealings. But I really loved going there with the band and playing the CMJ music festival and being able to play on air at WNET. The people I worked with on musical things were fantastic and it’s in that world that the city came alive for me. I’ll never forget lugging a trumpet and accordion and a suitcase through the subways to get to from Queens to midtown to play, or dinner with the band in Brooklyn, or getting to ground zero in October of 2001.

Fortunately the bad memories are several years removed now and fading and there are many more good times to remember.

I only saw the city in passing through JFK on my way to Istanbul. On my return I will fly through Paris and not return to New York. And just a week after that it’s time to leave the US, perhaps for a very long time. So today was farewell to New York. One day I hope to visit again.

Driving home into Florida for the last time today. The next time we leave it will be to move to T…

Driving home into Florida for the last time today. The next time we leave it will be to move to Thailand. I love Florida so this is kind of bittersweet.

This was posted on Google+…

I will be travelling to Chiang Mai the first week in March with a stop to do some work in Eastern Europe on the way. I can't detail everything at this point so I'll fill in what I can when it's done.

This was posted on Google+…
Older Entries