We had a parenting “first” a couple of days ago. Hard to believe it’s taken this long, but we had to make our first ER trip for a kid’s injury. We’ve had to take Bethany and Ellie for ear infections, and there was the visit to the peds after-hours clinic when Bethany shoved noodles up her nose (but that’s another story). But this was our first incident of bloodshed.

It happened Wednesday evening. Bethany was spending the night at Tim’s parents with her cousin, Madison. Since we only had two kids at home (and could do man-on-man defense, rather than zone), we decided to go out to the store. As we were getting out shoes and socks, Ellie took a tumble off the footstool where she had been sitting, and sliced her forehead on the corner of the speaker next to it. She got a good cut about an 1.25-1.5 inches long, and just deep enough that we decided to take her in. At least it was a glancing blow, not a real knock on the head, so we weren’t worried about a concussion or anything. But it was really bleeding, and of course, she was screaming.

We called Tim’s parents and asked if they could take Micah for a while. Fortunately, they only live a mile away and have a car seat, so Tim’s dad came right over for her. We quickly gathered up pj’s for her and sent them off, then got Ellie into her coat and into the car. By this time, the bleeding had nearly stopped, thanks to lots of pressure and ice (which Ellie wasn’t too crazy about). We got to the ER a bit before 7:00, I think, and were out of there by 9:00. Ellie was so good, and so funny. We tried to keep her quiet and still, but she’s not exactly the quiet and still type. While fidgeting around, she caught sight of her reflection in the window and was fascinated by the cut. I pulled out a compact mirror from my purse, and she stared at herself, giggling, for quite a long time. The other people in the waiting room got a real kick out of her. When we finally got to see a doctor, she took a quick look, cleaned up the cut a little, and put some dermabond on it.

It actually all worked out really well. Micah went to sleep at Granny & Granddad’s house not much past her normal bedtime, with no problems at all. Bethany wasn’t doing so well, and decided she wanted to go home around 9:30. But when I talked to her on the phone and reminded her that she would be all alone in her bedroom (since Micah was staying the night there), she changed her mind and decided to stay where she’d be sharing a room with Madison. She does NOT like to be alone, especially at night! So she ended up having her first successful sleepover.

Ellie’s fine. But she still won’t let us take the hospital bracelet off her. She loves jewelry, and I guess she thinks it qualifies. Whatever. Here she is. 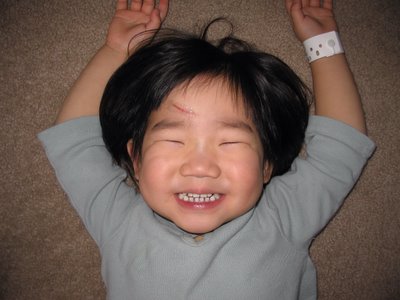 The shininess is from the dermabond glue. I just took this, 2 days after it happened. The doctor said she will have a scar from it, though it shouldn’t be too big. We think she’ll be proud of it.