More reminders that we’re not in Michigan

The girls and I were awakened just before 6:20 this morning by the sonic booms of the space shuttle coming in to land (Tim was already up, out running). Quite a way to wake up, with the windows and walls shaking!

Our back patio is covered with dead love bugs. At least we’re not being held captive by them anymore. For the last several days we pretty much couldn’t get out the back door since they had taken it. For anyone who doesn’t know, love bugs come out twice a year here and make a big mess. They don’t actually do anything–don’t bite, don’t sting, don’t eat plants, aren’t destructive, don’t stink when you smoosh them, nothing. But they smoosh really, really easily and like I said, make a big mess (especially on the front of cars). Here’s what our back fence was like when they first started coming out, before they got bad. You’ll probably have to click on the picture to see the bugs all over the fence and garage wall. Eventually our back door was covered like that, and the fence and garage were covered much, much more densely. We couldn’t get out without letting a bunch of them into the house. 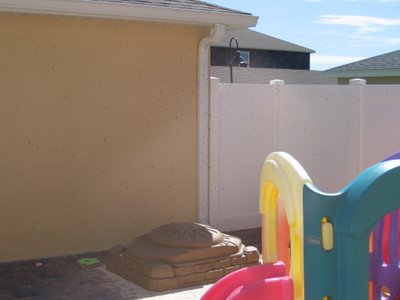 They’re dying off now, and I’m guessing they’ll all be gone in a few more days. We’ll just have to sweep up the remains.

We had a cool front come through yesterday, and the weather guys on tv thought that last night’s low temperature would drop down below 70 for the first time since May. But it didn’t. We still have yet to see a temp below 70 since moving here, and we’ve only had 1 day that we didn’t see any sun (the day Ernesto came through). We’ll take the sonic booms and love bugs for that!