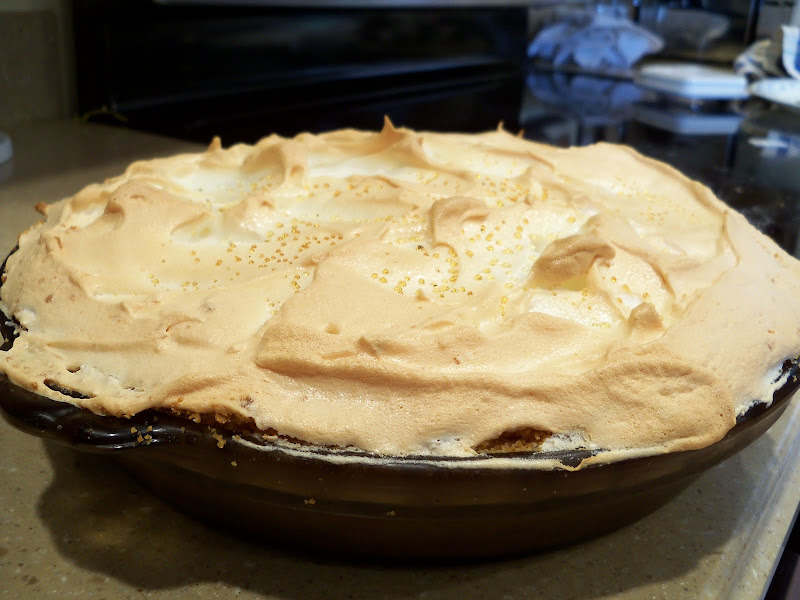 I said I’d post if my pie turned out well. I’d say it’s pretty good, especially since it was my first time ever making a meringue pie. I took a couple of shortcuts that made the end result a little less awesome than it might have been, but it’s still good.

In a heavy saucepan combine water, sugar, cornstarch and salt. Place over medium heat and bring to a boil, stirring frequently. Once it’s boiling, remove from heat.

Stir in beaten egg yolks. Note: I tempered the egg yolks a bit, then poured them into the pan of hot sugar syrup very slowly, in a very thin stream while stirring constantly to avoid curdling the eggs. Once eggs are mixed in, return the pan to medium heat and boil for 2 minutes or until thick, stirring constantly.

Remove from heat and add the lemon juice, pureed kumquats and margarine (I added the margarine a pat at a time, letting each one melt before adding the next). Cool and pour into prepared pie shell. Top with meringue.

In a 1.5 quart mixer bowl, combine egg whites and cream of tartar. With an electric mixer at medium speed, beat 15 to 30 seconds or until foamy. Gradually add sugar, beating at medium speed of mixer 1-1/2 to 2 minutes. Turn mixer to high speed and beat for another 1-1/2 to 2 minutes or until stiff peaks form. Spread evenly over warm pie, sealing meringue to edge of pastry. Bake in preheated oven 15 minutes or until meringue is golden brown. Turn off oven. Cool pie in oven with door ajar 2 hours. Cool on a rack at room temperature away from drafts for 3 hours before serving. 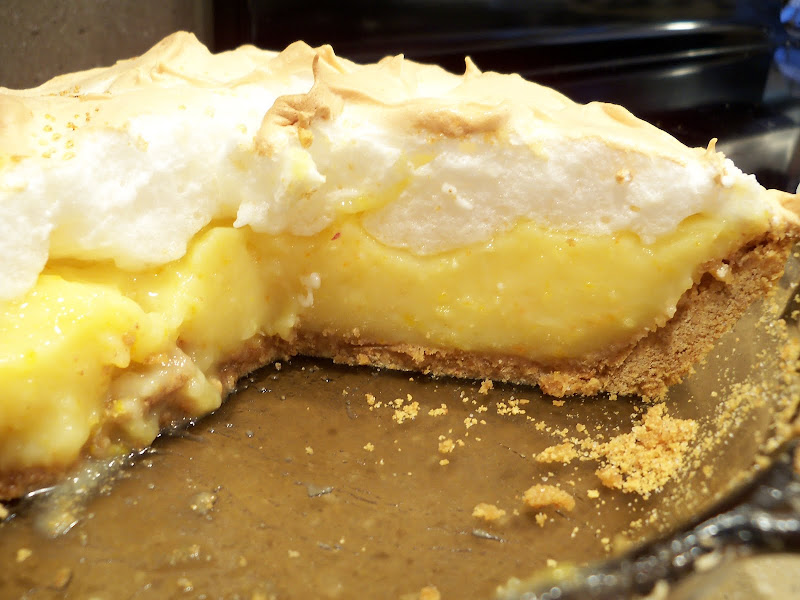 Now for my changes. I was feeling lazy and didn’t want to mess with making a pie shell, so I decided to do a graham cracker crust instead. That was okay, but I think it would have been better with a pastry crust. After making the kumquat curd I had a full 2/3 cup of kumquat puree left, so I decided to use it all for pie. I debated between making two 9-inch pies or one 10-inch deep-dish pie. I went with the one big pie. I probably would have been better off with two smaller ones. But doubling the filling recipe worked fine.

Since I’m still out of lemon juice I used lemonade (again) in its place.

When I filled the pie shell, I put too much filling in. I also had let it cool a bit (as the recipe told me to). It was later that I learned that it’s best to put the meringue on a hot pie filling so the underside cooks better and the meringue “bonds” to the filling. Oops.

I had to make dinner once the pie was baked, so there was no way I could leave the pie in the oven with the door ajar for two hours. I let it cool in the oven for a while (half an hour, maybe?) then put it on a cooling rack. I let it cool at room temperature for about 4 hours, then put it in the refrigerator before I went to bed.

If I hadn’t had the extremely awesome kumquat curd yesterday, I probably would have thought this pie was great. It’s good, just not as good as the curd was. But I’ll definitely make it again next kumquat season, only without the shortcuts.