We’ve been promising our Facebook friends pictures of the house we’re going to be renting but I thought it would be better to post them here instead of just there. That way I can do a a little more explaining and describing.

Before I show you the house, let me put it in context by telling you a little bit of what I know about Thai houses in general. Most (including ours) do not have central air conditioning. Instead, they are designed to make the most of airflow and natural cooling. All the houses we’ve looked at, and most of the houses we’ve seen even just driving around, are built of bricks or cement block covered with plaster or stucco. Pretty much everything has a roof of terracotta tiles. There are lots of windows on all sides of the house to bring in the breezes. There are usually very large roof overhangs so that the windows can stay open during the cooling rains. The roof overhangs can make houses look much bigger from the outside than they actually are. Pretty much all houses also have bars on the windows and sometimes the doors. My guess is that this is because the windows are left open most of the time. Bars on the windows don’t indicate anything about a neighborhood’s crime rate.

There aren’t any garages, but most homes have carports. This isn’t just for parking the car; it also makes for a place to dry the laundry during rains. It’s a also good place to leave shoes, as Thai culture requires removing shoes before entering a home. There’s most often a small covered porch or patio area at the back of the house as well, usually off the kitchen. That’s where the washing machine, cleaning supplies, tools, etc. are generally kept.

All homes have a wall around the property with a large rolling gate at the driveway. I think this is just the custom, but it’s definitely good for keeping the stray dogs out (and there are lots of those).

Okay, now that I’ve said all that, here’s our house! 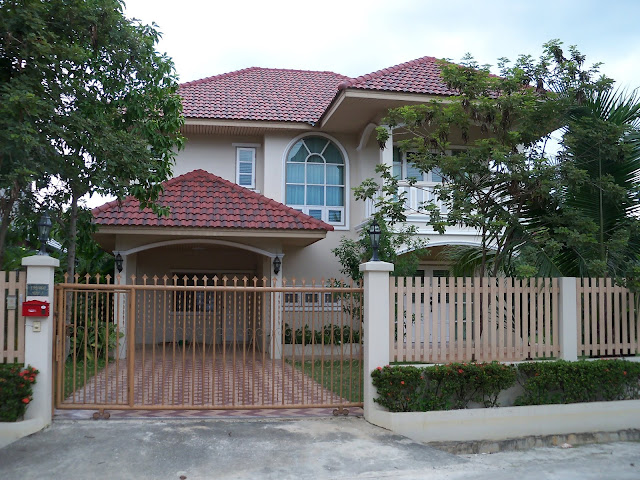 Our guess is that it’s about 1400 square feet, with three bedrooms and three bathrooms. It’s got a full kitchen, which not all Thai homes have. The front door (under the archway to the right) leads directly into the living room. 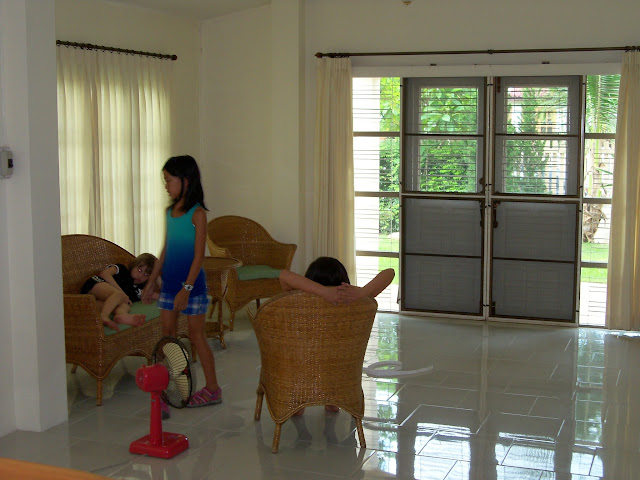 That’s the living room and front doors. This house is what I’d call semi-furnished. It comes with that little wicker set in the living room (small loveseat, two chairs, small table) and some other furniture which you’ll see in the next pictures.

The living room is open to the dining room: 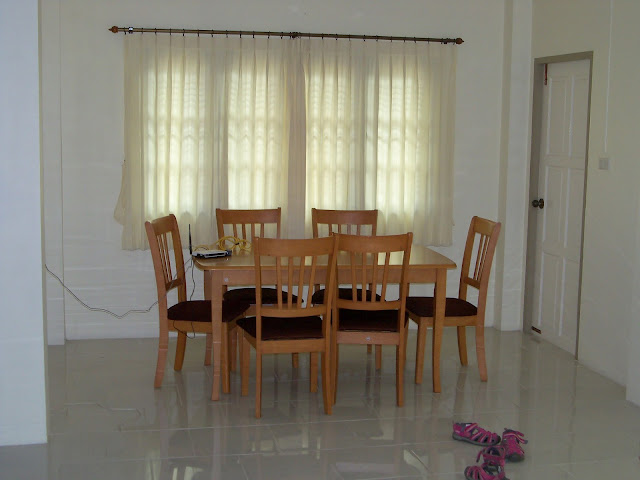 Nice that it comes with a table and chairs. My back is toward the front door here. This is the view to my left: 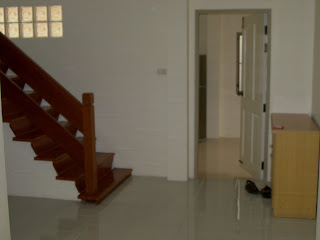 That didn’t focus (it was pretty dim) so I’ll keep it smaller. But there’s a bathroom to the right, and a closet under the stairs to the left. Straight ahead is the kitchen. 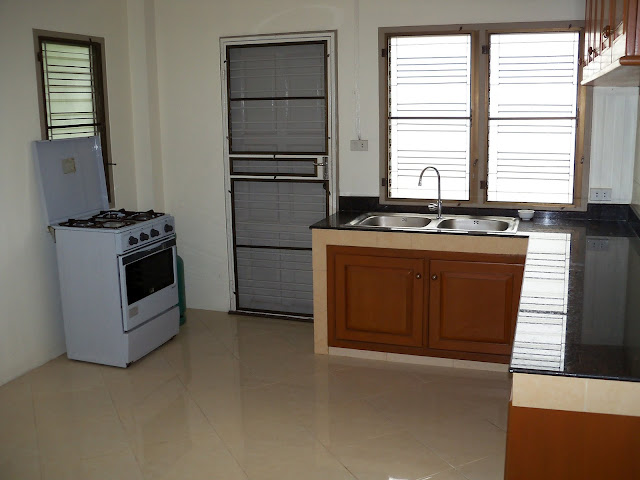 I’m looking at the back of the house, kitchen door on my right. There’s a door behind me that leads into the carport. This is a really big kitchen by Thai standards. Most Thai houses don’t have built-in kitchen cupboards, so this is great. They also seldom have a stand-alone stove, just a one- or two-burner cooktop that sits on the counter. We are lucky to have a three-burner cooker and even an oven. We also have a decent-sized refrigerator, which is to my left but not pictured. (Actually a lot of Thai houses don’t have kitchens, but just an outdoor cooking area.)

Even though we have built-in cupboards, we’ll need to get a stand-alone unit for storing food. Apparently the bugs will get into the cupboards but there are special food cabinets that do better at keeping them out. That will go in the space next to the stove. 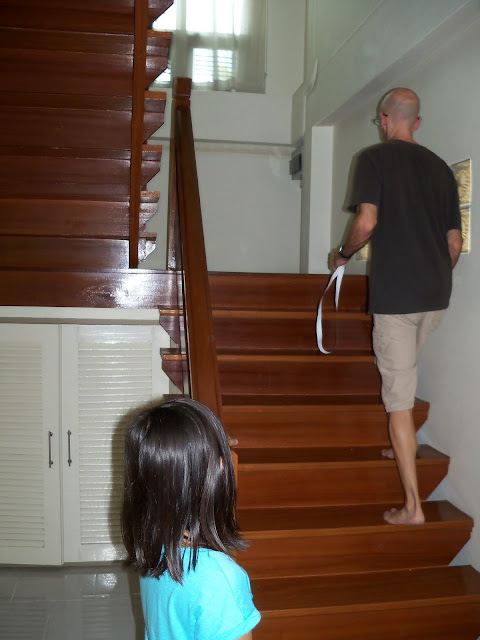 The stairs are really pretty. 🙂  Upstairs are three bedrooms and two bathrooms. The bedrooms all have individual air conditioners. It’s pretty hard to get a decent picture of a bedroom so I’m not going to post them. There are two smallish bedrooms, each about eleven feet square. One comes with a double bed and wardrobe (there are no built in closets here), the other is empty. The master bedroom is bigger and comes with a bed and storage cabinets.  We’ll be replacing the mattress–it looks like it’s seen better days–but the bed frame is fine so we’ll keep that.

Here’s another little tidbit about Thai houses. Most don’t have hot water piped through the house. Ours is no exception. The showers each have their own heating unit (which is typical), but there is no hot water in any of the sinks including the kitchen. Often the shower is just a sprayer on the wall in the bathroom, no curtain or tub to keep it contained. This house is nice in that all of the showers have a rail where we can hang a curtain, and one even has a small bathtub.

Speaking of water, you can’t drink it from the tap. Most people have drinking water delivered in large bottles, which is what we’ll be doing. Tap water is fine for cooking (as long as it boils), cleaning, bathing, and brushing teeth. But most people still have a whole-house filtration system just to get sediment out.

We have the keys to the house already but we can’t move in until after July 1. Obviously we need to get quite a lot of furnishings so it will probably take us a couple of weeks after that before we’re actually living there. We didn’t ship anything over so we’re starting from scratch: linens, dishes, cookware, you name it. But that’s another story!

We have a nice yard, big enough for the kids to play and big enough to get a dog.

The girls are really excited about that! It will be an all-outside dog, which is really common here. It’ll be good to have a watchdog to help keep the strays away. 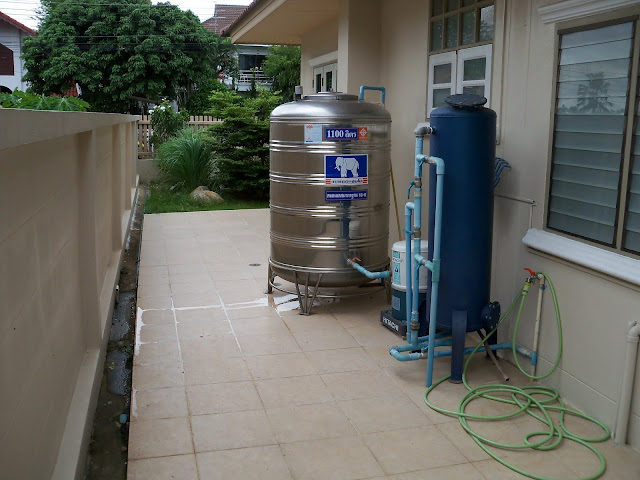 This is the back of the house. The silver tank is a reservoir. Until about a month ago this neighborhood had community water. Apparently at times it could be inadequate, so everyone has a reservoir like this as a backup. We were just hooked up to city water so hopefully that won’t be an issue. The blue is the filtration system, I think. We’ll be getting a washing machine that will go out here too. That’s the window over the kitchen sink at the right. 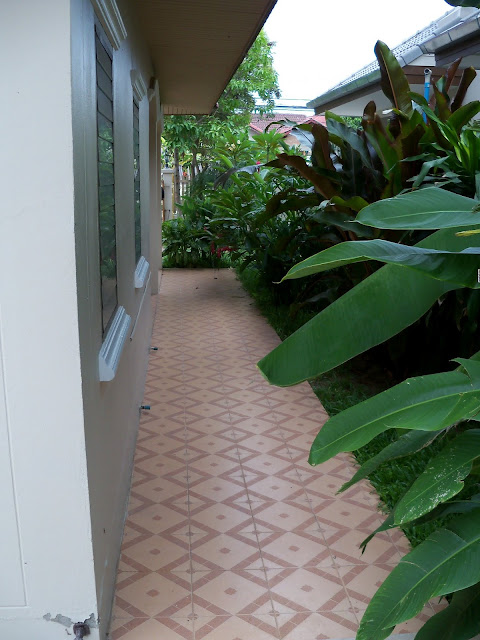 The other side of the house, facing the front. I think that might be a banana tree to my right. That would be yummy!

Our new house is in the same moo baan (neighborhood) as the house we’re currently subleasing, called Suan Non Si (I don’t know what that translates to). We really like it here. There’s a good mix of farang (foreigners) and Thai, lots of trees, a great little restaurant creatively named Ah Han Thai (“Thai Food”) that even delivers, and a nice little coffee shop.

So there you have it.