Posts in Category: life in Thailand

We attended a Loi Kratong party hosted by a friend of a friend. Kratongs are small floating offerings that the Thai people present during the festival of Loi Kratong. We made ours in the traditional way, from banana tree trunks, banana leaves, flowers, and candles. But there the similarities ended. Devout Thais will place coins, fingernail clippings, hair clippings, and other offerings to the gods of the rivers, asking the river gods for protection and favor. Then they will float their offerings off down the river, canal, or other body of water. END_OF_DOCUMENT_TOKEN_TO_BE_REPLACED

END_OF_DOCUMENT_TOKEN_TO_BE_REPLACED

90 minutes of Buddhist ceremony with 10,000+ of our closest friends.

END_OF_DOCUMENT_TOKEN_TO_BE_REPLACED

We’ve done two things this week that make me feel like we’re making the adjustment to life in a new country: renewed our car insurance and registration, and navigated non-emergency medical care.

When you buy a used car here, the registration/taxes and insurance generally come with it. So even though we bought our car in July, we didn’t have to do anything about those until this month. I’ve heard horror stories about going to the tax office and waiting in line, only to find out you’re missing this insurance form or that inspection certificate. Needless to say, this has not been something we’ve looked forward to doing. But a friend happened to mention having her insurance renewed just a few weeks ago. We got her agent’s name and location and headed out to find him a few days ago.

Side note: in Thailand, it generally doesn’t do any good to try to make a phone call in order to set up this kind of thing. Even if you can speak the language (or have someone to make the call for you), in the long run it’s usually more efficient to just get in your car and go to wherever it is so you can ask your questions in person. And don’t even think about sending an email. That’s usually a total exercise in futility.

Anyway. We had a little trouble finding the place, but a few texts with my friend got us straightened out. Once there, we were thrilled to learn that he would take care of almost everything for us. All we had to do was go and get our car inspected, and he told us exactly where to go to have that done. (And no, he’s not getting a cut from the mechanic. The fees are regulated so it doesn’t really matter where you go–he just asked where we live and told us the nearest place to us.) We took the certificate back to him and he is handling the rest, including going to the tax office. We just have to go pick up our new window sticker in a couple of days. So there’s a big item checked off the to-do list! 🙂

It’s kind of ironic that getting emergency medical care was way simpler than getting routine care. When Tim was so sick right after we got here, I called a friend who picked him up and took him straight to the emergency room of the hospital with the reputation for handling farang well (and having a lot of English-speaking staff). He was seen and admitted promptly, with very little confusion or complication. Dealing with insurance and payment at the end of his stay was a total pain, but at least actually getting the care wasn’t so hard.

I have a thyroid condition that needs annual monitoring. It’s time for my annual check, which means bloodwork and an ultrasound of the thyroid. I did send an email a few weeks ago and in this situation (with an American doctor) it actually did help. He told me which days he’s in the hospital clinic and to just stop in, no appointment needed. He’s at a different hospital than Tim was in, so I was not at all familiar with it. Long story short, between finding parking (a quarter of a mile away), finding my way through the registration system, and waiting time, I was there for nearly four hours. On the bright side, I saw the doctor, had my blood drawn, and got my ultrasound done. The technician even told me the ultrasound result on the spot–everything is as it should be. All for a grand total of about $65. I guess I shouldn’t complain too much.

So anyway, just managing those two things makes me feel like we’re really living here, not just visiting. Next up: driver’s licenses. Which requires a notarized document from the U.S. Embassy and a doctor’s note just to get in the door, then you have to pass the reflexes test, written test, and vision test. Not looking forward to that! 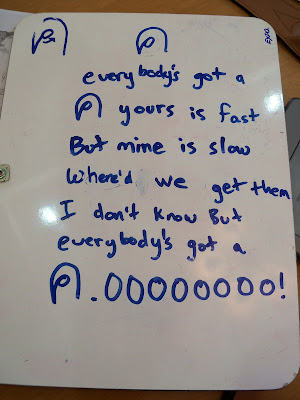 When in company, put not your hands to any part of the body, not usually discovered.