“Mom, do we have to do school today?”

For the last couple of weeks, this has been the girls’ morning greeting for me. When I answer in the affirmative, the response is a chorus of, “Awwwww!”

Awesome. Just what a homeschooling mom loves to hear. What’s worse is that I’ve been feeling almost the same way.

Obviously a change is needed.

So I’ve been spending a lot of time thinking about what seems to be working and what doesn’t. What I like, and what frustrates me. What the girls seem to like, and what makes their eyes glaze over. I also asked them for their opinions: what do they wish we could do more of, what do they hate, what don’t we do that they would like to. What I came up with:

As I was pondering all this, a link to this blog post hit my inbox. If you don’t want to take the time to read it, the basic gist is that the writer takes a homeschooling “sabbatical” every eighth week. It made a whole lot of sense to me. I’ve realized that two months is about the max I can go before I feel burned out on school and hopelessly overwhelmed in every other area of life. It’s been about that long since our Christmas break.

Tim and I talked, and come to find out he’s feeling the same way. A seven weeks on/one week off schedule sounds really good. During the one week off we’d still do a little bit of work: a day or two of math lessons, about the same in our Language Arts workbooks, maybe continuing work if we’ve got a special project going on. But mostly it’ll be a week of slowing down, catching up on other things, relaxing, and having fun. I’ll also use that week to plan out the next seven, which leads me to our next change: slowing down our Core.

For our Core, we use curriculum from Sonlight. Core includes bible, memory work, geography, history, social studies and literature. This is our favorite part of school. Sonlight’s Instructor’s Guide lays out a 36-week schedule so you can complete a Core in a traditional school year. But to do that, the pace moves pretty quickly. Sonlight doesn’t include any hands-on activities in their guides, leaving that up to each family to do as fits their schedule and interests.

We’re doing their Core 2 this year. Up to this point, I’ve pretty much followed the schedule they give to the letter. That’s going to stop. I’m going to slow down to about half-time and add in more activities, projects, videos and field trips. As it happens, we’re right around the year 1400 in our history studies. There was a lot going on in the world at that time, which gives us lots of potential things to do. So far, I’ve planned out about four of the next seven weeks. Our studies for those weeks will cover explorers, Aztecs, Incas, Conquistadors, a quick look at east Africa, and the beginning of the Renaissance. Some of the possible projects I have planned include making pictures with spices, making a lapbook about the Aztecs (using a History Pockets book I already have), a field trip to St. Augustine, and some art projects related to Giotto, Botticelli, Michelangelo, da Vinci and Raphael. The following three weeks will cover the Reformation and the Elizabethan age. I haven’t started working on the extra activities for those weeks yet.

If that seems like a lot to cram into seven weeks, consider that it’s actually only four weeks’ worth of material according to the instructor’s guide! Also, this Core is considered an introduction to world history:  I’m not expecting them to get a really in-depth understanding of the topics, just a good overview that will hopefully stick with them.

A smaller change is going to be giving the girls a little more autonomy and independence in their work, especially Bethany. For example, I’ll give her a list of assignments at the beginning of each week and let her decide which ones to do when. There will be certain things she’ll need to do every day, others that will only be once or twice a week. But she can choose which days and in which order to do those things, and just show them to me when she’s finished.

I’m already excited about all these changes, and I think the girls are too. I know they’re excited about taking this week off! The only schoolwork on the schedule is a couple of Language Arts lessons and working on book reports. 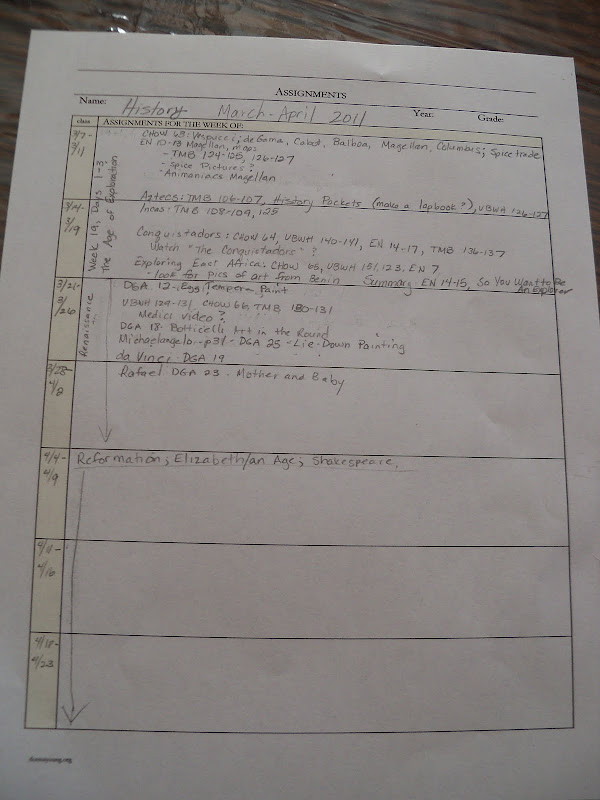 I have just about everything ready for the start of our upcoming school year. Of course everything is open to change, but here’s what I’ve got planned. Bethany will be in 4th grade, Ellie and Micah in 2nd.

Tim teaches science, math and piano. He’s going to be using Real Science 4 Kids Pre-level 1 biology with all three of them, and CLE math. I think he’s still figuring out what levels he’ll use for math.

I think we’ll probably start in another week or two. I haven’t decided yet if we’ll just jump right in with everything or start slowly. I’m leaning toward jumping right in. We’re doing quite a lot more than we have in the past, so I expect our school days to be an hour or two longer than before. The girls aren’t thrilled with this, but they are looking forward to starting Spanish and art which are both new for us.